Solid
(the first book in a series)
Shelley Workinger
235 Pages 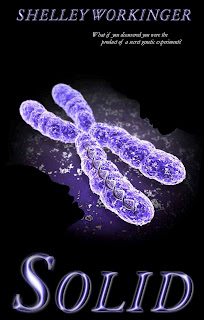 *This is an author requested review. I was given a copy of the book in exchange for an honest review. I was not paid for this review.* (A huge thank you to Shelley for contacting me!!!)
Description:


Clio Kaid may be 17 and just beginning the last summer before her senior year, but her life is anything but typical.She's just discovered she was genetically altered before birth and is now headed to a top-secret Army campus to explore the surprising results of the experiment.Follow Clio and the other teens as they develop fantastic super-abilities, forge new friendships, find love, and uncover a conspiracy along the way.

Some pre-review notes: Like I said in my previous post, I'm (once again, hopefully for the last time) changing my rating system. No more stars or number "scores." Instead, I'll be describing the book with one of 5 phrases: Horrible/Did Not Finish, Okay Read, Liked It, Loved It, and Remarkable Read ;) I'm implementing this system as of now, cool? Cool. Also, as hard as it is for me, I'm determined to un-tl;dr my posts, starting with this one. Finally, I'm doing away with the "what I liked" and "what I didn't like" sections, and I'm just going to freestyle my review. Um, getting back to the actual book... love love loved the cover, and it doesn't hurt that these specific shades of purple are like, my favorite colors. The description was short and sweet, and told me everything I needed to know to make the decision to read this book, yay! Also, the prologue is available to read at solidnovel.com

Solid was a relatively short read, but within its 235 pages, Shelley Workinger managed to fit suspense, romance, and a whole bunch of sarcastic wit. I was laughing out loud at much of the banter between Clio and her friends. (There were a lot of retorts, though, and at some times I was a bit put off by it.) They seemed, at first, a bit cliched; you have an arrogant jock, a super-sweet gal, the cute and thoughtful love interest, and a snarky mean-girl who warms up to the rest of the gang. But I found that these characters became much more fleshed out and unique as the story progressed. The plot itself wasn't too intense, but it was enough to keep me interested and reading, and wanting to know so much more by the end of the book. The romance was very sweet, but not saccharine and unrealistic, and I was happy to find none of the careless L-word use that seems to run rampant in much of today's YA romance. Also (thankfully) missing was the constant barrage of thoughts about the physical appearance of a love interest that ALSO tends to run rampant in today's YA romance. (City of Lost Souls, anyone?) So yeah, I was definitely pleased with the romance in this book.

The book's pacing seemed pretty even to me, except for the end. All of a sudden, things just started moving really quickly. The reader finds out quite a bit of info, and then BAM, we encounter the climax. And then it was over with just as quickly. It was a little disappointing, but I have hope for the next book. (Series time, woot woot!) This was what I like to call an "informative style" book, which is just as engaging as an "action style" book; you just get to learn things alongside the characters (about themselves, their pasts, their settings, etc) instead of like, mentally fighting alongside the characters lol. I'm a fan of both "styles" and Solid was one of the better informative style books I've read in a while.

My only gripe is that the superpowers of the teens were introduced very vaguely. As the story progressed, their powers were described more specifically, but I was a little irritated at how long it took for me to figure out what, precisely, made the kids special. (Or maybe I was just having one of those "slow-to-comprehend" days. If you've never had one, you're lucky. They make you feel like quite the fool after a few forehead smacks of "Ohhhhh, I get it now!!!") I have a bunch of questions that I'm hoping will be answered in the next book(s); yes, there are two more! The third one, Sound, is being released this fall (I'm looking for the exact release date and I'll post it when I find it.) Now I must find Settling (book two) which sounds verrrry promising from the sounds of the excerpt at the end of Solid ;)

Again, a big thank you to Shelley for giving me the opportunity to read and review this book. I definitely would recommend it to pretty much all middle school age readers and older. As cliched as this phrase is going to sound, "There's something in it for everyone."

My rating: Loved It!
Posted by Lia, Remarkable Reads at 5:45 PM