Review of Nothing More, Nothing Less by Ashley Dukart 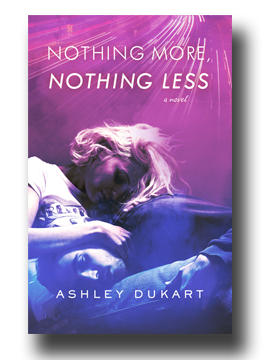 Note: This is an older YA/New Adult novel. This book contains mature content.


*I received this book in exchange for an honest review. Thank you to Ashley Dukart for providing me with a copy!*
When Brandon finds that his mother committed suicide, he blames himself for her decision. His guilt drives his young life into a downward spiral of drugs, drug dealing, and violent repercussions when his “business partners” don't get what they want. Haunted by the past memories he often relives, his brothers, who don't always seem to understand him and what he's going through, desperately try to help, but as life becomes further entangled, will Brandon find the escape he so desperately needs before it's too late?
This was quite an intense story for me to read. I mean, I've read some pretty dark and/or emotional novels, but this one affected me differently. I'm pretty sure it's because those other emotional reads have been paranormal or fantasy books, and this was...well, it was much more real. The way that addiction destroyed so many lives and ruined so many opportunities struck a chord with me, and caused me to reflect on events in my own life.
The main character, Brandon, is one of those people who has you shaking your head with disapproval one minute, then shaking your head with sympathy the next. The story really revolves around the life choices he's made and their miserable aftermath. You just want to grab his drugs and get rid of them forever. Brandon starts out as a self-medicator with an appetite for drugs, alcohol, and ladies. Mostly drugs, though.They free him from the burden of having to feel, which is apparently a heavy burden on him. (I really disliked him in the beginning because of this. His apathy, his lack of caring about, well, anything.) He has two brothers who are honestly concerned about him, and they try to get him to stop using, with no success. They let him live in their home, where he spends most of his time recuperating from crazy nights out. You soon find out that Brandon not only uses drugs, he deals them too. Many issues he faces in the novel are due to his poor choice of a "career."
As the story progressed and pieces of his tragic past were revealed, I felt more sympathetic towards Brandon. One bad decision led to another horrible consequence, which led to another bad decision, which led to another consequence... it was a vicious cycle of sorrow, anger, and apathy. Sometimes he really did try to make the right choice, but a previous decision or consequence ruined it and he was dragged back into the world of drugs. There was no miracle rehab, no "love conquers all - even addiction" romance, no religious enlightenments to draw Brandon out of his dire situation. He had to realize, on his own, that life was not better because of drugs...it was worse.
I appreciated the reality of this novel. Brandon's story did not have a perfect happy ending. (I mean, just as a forewarning, this author was not afraid to kill off characters!) As much as I enjoyed the story, however, I had a few issues with the writing. There was some irritating repetition of certain phrases or ideas. For example, every time Brandon was with a girl, the author would say that the characters "claim" each other's mouths/bodies etc. over and over. Another issue I had is that every time a new character was introduced, even if they were just a really minor character, Brandon would describe what they looked like. It made me think that these characters would return later in the book, or had some unknown importance, but that wasn't the case.
Overall, the issues didn't detract from what was a riveting story. You may be blown away by the ending, but it leaves you with a sliver of hope...not just for Brandon, but for anyone else in the real world using drugs. I would recommend this book to older readers willing to read about the harsh realities of heavier drug use, from a user's point of view.