Xor: The Shape of Darkness
By Moshe Sipper

*This is an author-requested review. I was given a copy of the book in exchange for an honest review. I was not paid for this review.*

"On his twelfth birthday Lewis Nash comes home from school to find that his house has blown up to smithereens, killing his father. Having lost his mother in an accident four years earlier, Lewis realizes he is now an orphan — but he has no time to dwell on it. The moment he gets off the school bus a fearsome wolf-man tries to grab him. The boy is saved in the nick of time by Master Long, who reveals to him that he’s a Shaper from a place called Xor, which is being devoured by the Realm Pirates. Lewis learns that he must do his utmost to become the powerful Shaper he was destined to be. Because, it would seem, he’s the one and only chance Xor has."

When I read the description, I was hooked. I love a good sci-fi read every once in a while; it helps to clear my head from all of the lovey-dovey (often paranormal) romance stuff I encounter in many of my YA reads. (Don't get me wrong, I love lovey-dovey romance stuff... in moderate doses.) Xor is a book filled with adventure, a bit of mystery, and a little bit of good ol' nerdy science. (yay! The geek in me thought the nano-technology concept was so. cool.) It was a simple enough read that middle-grade readers can understand the concepts, yet at the same time it was complex enough that older readers, such as myself, are drawn to devour the chapters. I love books like this, where readers of almost all ages can enjoy them!

Pros/Strengths: The settings were described very well. I was able to, for the most part, picture the scenery easily in my head. The characters were diverse, ranging from a giant wolf-ish man to an "artificial person" aka ArPer (these are like robots, but extremely advanced. They are "grown" using the nano-technology concept introduced in this book.) Nano-technology... just the idea of this was really awesome. It made the foreign setting of Xor seem different in a realistic way. Alien, but not alien at the same time. There were a great many obstacles that Lewis and his friends encountered, but they overcame them together, using problem-solving skills. There were some surprising and powerful "revelations" throughout the book, and I'm a big fan of those. There was character growth in this story, which I always love to read about. Watching (or rather, reading,) Lewis change from a little boy into a fearless young warrior was great. Not only did he grow in character, he became a very accomplished Shaper in a short amount of time (you find out why he's so unique at the end of the book!) The last 20 pages were really intense, and I think a strong ending like the one in Xor can determine whether a book is good, or great.

Cons/Weaknesses: I felt that the beginning was a little too rushed. (Some other parts of the book felt a little unevenly paced as well.) I wish I could have known a little more about Lewis's life on earth with his adoptive father, before he was taken to Xor. I also would have loved more detail on the actual Shaping process, and Lewis's accomplishments in training. Some of the obstacles and problems seemed too easily solved/defeated, such as the Drakes conveniently showing up with the music gems in hand. But, I realize that if the problems had been more complex, younger readers may have gotten lost in their solutions. An epilogue would have been much appreciated! You know how sometimes, a story leaves off somewhere and you're left wondering "well, what happens next?" That's how I felt at the end of the book. There were many questions I had that remained unanswered. Would Lewis ever return to "backwater?" Will he get to meet children his age on Xor? What are his biological parents like? How much more powerful, as a Shaper, could he become? What happens to his new friends, now that the mission is over?

Overall, I would certainly recommend this book to both younger and older readers! Especially to those who are looking for a sci-fi without an overwhelming amount of romantic baggage. I'd love to read about Lewis and his "crew" again, and I hope a sequel will be published! (Perhaps Lewis as a teen, which I think would give the book a more serious tone.) It would be very interesting to see how he handles adolescense, his Shaping abilities, determining right from wrong, that kind of thing.

As I've been (very impatiently) waiting for my library to get me a copy of Underworld, the second book in the Abandon trilogy by Meg Cabot, I've come across the first two chapters of the book on her website. Again, you may have already read them, but I've been basically disconnected from the world of books for the past 4 months, and I have so much catching up to do. Well, if you haven't already read them, click away!

(On another note, how pretty is the cover?! Every time I see it, I fall in love with it again :D)
Posted by Lia, Remarkable Reads at 8:03 PM No comments: As I was looking through the books on my "to-read" list, I came across The Golden Lily by Richelle Mead (Book #2 of the Bloodlines series.) It was released this week!!! I had no idea, and now I'm super excited to get my hands on a copy. My library is having problems with their book holds, which kind of upsets me because I was really looking forward to this book. So naturally, I looked for excerpts online, and I found the first and second chapters, yay! Most of you have probably already read them, but if you haven't, click here.
Posted by Lia, Remarkable Reads at 7:56 PM No comments: 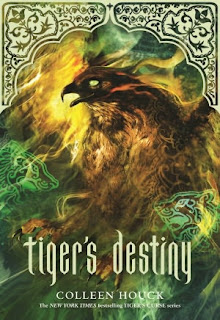 It's here! The cover for Tiger's Destiny, the fourth book in the Tiger's Curse series, has been revealed on Barnes and Noble website, and I cannot emphasize how amazed I am. I love the colors; the shades of green and gold are so exotic looking. And the bird... it's powerful. Breathtaking. Unexpected. Gorgeous. Mysterious. (I could go on, but I won't waste precious time that you could be using to stare at the cover.) Thoughts? Theories as to how this fiery bird of prey will tie in to the plot? Feel free to comment :)
Link to the book on B&N: click here
Posted by Lia, Remarkable Reads at 7:53 PM No comments:

Lia here with a movie update! This one's for all you Tiger's Curse fans who may not have visited the series webpage recently. *is guilty of this crime* Colleen Houck blogged that the Tiger's Curse movie is being written by none other than Julie Plec! She's the co-creator of the Vampire Diaries, aka my current fave TV show, so I'm pretty flipping excited to see what wonders she'll be working on this movie. To read the entire post, click here!
Also, the cover for Tiger's Destiny will be released today, and as soon as I see it, I'll post it :D

Posted by Lia, Remarkable Reads at 7:37 PM No comments: