This was such a good book, I had to post at least a few sentences to rave about it! I Hunt Killers is unlike any other book I've read. Narration - I couldn't put the book down, that's how immersed I was in Jazz's broken mind. This POV was just brilliant. It was depressing and hopeful, factual and opinionated, humorous and dead serious (pardon the pun) all at the same time. Genre - You can't fit it into just one. Horror, thriller, comedy, self-discovery... this book was all of that and more. Characters? - A harmonious balance of quirky and realistic (although I'm not sure how "realistic" Jazz's crazy grandma is...) I had no trouble envisioning them as actual people dealing with real-life situations. Plot - The story was evenly-paced, and I felt a genuine sense of urgency alongside Jazz each time a new victim was discovered. I feel that the book ended at a perfect place, and I am so excited for the sequel Game, coming out April 2013! Posted by Lia, Remarkable Reads at 7:02 PM No comments:

Review of Bridgeworld by Travis McBee 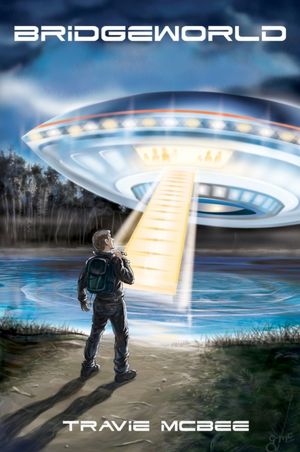 *I was offered an e-copy of this book in exchange for an honest review. I was not paid for this review.*
Description: William Haynes was the type of guy that everyone wanted to be. He was an honor roll student and captain of his middle school football team. He was dating the most popular girl in the school and had dozens of friends. Yes, life was perfect for Will...that is until a strange man shows up and forces his parents to reveal a secret they have kept hidden since he was born. He is told that he has been given a scholarship to a prestigious private school that his parents attended, a private school that happens to be in space. Will must choose between a life many would die for and a life none could imagine. A life where he is no longer perfect, where he must make new friends, and where he must survive a school rivalry like no other.
I found Bridgeworld to be, unfortunately, an unmemorable read. The characters seemed very cliched. They each had a few distinctive personality traits, but they weren't unique enough for me to really care about or connect with them. I was able to relate a bit with the main character and his struggles, like adapting to life in a foreign environment, and having to make new friends (while being cut off from old friends too.)
The romance/love in this book was light, which made me happy. It was just over the border between believable and unbelievable; I couldn't take it seriously. This was fine with me, because the focus of the story wasn't the romance :)
In my opinion, the author used too many descriptives, at least throughout the first half of the book. Adjectives, adverbs, similes... they overwhelmed most sentences. It was very distracting, and it made focusing on the actual events or people being described pretty difficult. Because of this, I ended up skipping through many of the paragraphs. (...Never a good sign :| )
Another thing I found myself skipping over was the laughing. There were a bunch of times where characters would have an awkward moment, or tell a joke, and there would be a detailed description of them laughing. It made me mentally cringe, and I basically skipped any scene where laughing might be involved.
There were lots of grammar mistakes, but I've never used these as a reason to give a bad review. Distracting, yes, but these mistakes don't determine the quality of an overall story. I'm assuming that the physical copies of the book were properly edited.
The world building seemed strong to me. I was able to mentally picture many of the objects and places described. The author managed to take alien life, something we usually associate with either strange green blobs/ vicious insect warriors/insert your choice of alien stereotype, and turn it into something that the reader not only understands, but can imagine as "real." That takes skill, and Mr. McBee has it.

In the end, I struggled to finish this book, and I couldn't immerse myself into the story at any point. Whether it was because of characters, skipping over whole paragraphs, or maybe the story just wasn't for me, I did not enjoy reading this book. I might recommend the physical copy (if they have indeed been edited) to younger male readers, as in middle school age or lower.

My rating: Okay Read
﻿
Posted by Lia, Remarkable Reads at 3:04 PM No comments:

The blog is here!

The old blog is officially deleted, and this URL is now the home of Remarkable Reads! *Time to break out the party hats, vuvuzelas, fireworks, all that good stuff* ...*ahem* on a more important note, I finally have a day off from work so I can post about everything I've wanted to say for the past few weeks. (After sleeping forever, of course.) A review for Bridgeworld by Travis McBee should be posted by tomorrow. There are some awesome shows premiering this month that I'd like to fangirl over. And I've finally added the "About the Blog" page. (This is what I consider "getting a lot of work done.") Oh, and my first blog hop is coming up on October 9th! It's the Happily Ever After hop, hosted by I Am A Reader, Not A Writer and Murphy's Library . Look forward to a sweet giveaway :)  (Get it? Sweet? Like happy endings and fairytales? I'm cheesy, I know ^.^ )
Posted by Lia, Remarkable Reads at 10:57 AM No comments: