Ugly to Start With
by John Michael Cummings 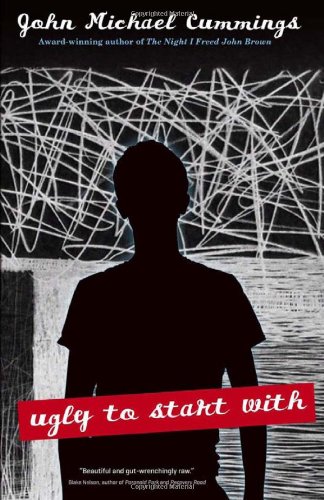 *This is an author-requested review. I was given a copy of this book in exchange for an honest review. I was not paid for this review.*

Description: "Jason Stevens is growing up in picturesque, historic Harpers Ferry, West Virginia in the 1970s. Back when the roads are smaller, the cars slower, the people more colorful, and Washington, D.C. is way across the mountains—a winding sixty-five miles away.

Jason dreams of going to art school in the city, but he must first survive his teenage years. He witnesses a street artist from Italy charm his mother from the backseat of the family car. He stands up to an abusive husband—and then feels sorry for the jerk. He puts up with his father’s hard-skulled backwoods ways, his grandfather’s showy younger wife, and the fist-throwing schoolmates and eccentric mountain characters that make up Harpers Ferry—all topped off by a basement art project with a girl from the poor side of town.

Ugly to Start With punctuates the exuberant highs, bewildering midpoints, and painful lows of growing up, and affirms that adolescent dreams and desires are often fulfilled in surprising ways."

This book was definitely a unique read for me. I don't often immerse myself in a realistic novel, although after reading Ugly to Start With, I'm inspired to read more! The way Jason's story is narrated...well, it's not like any other book I've read. He relates his teenage years to the reader in a format that almost resembles episodes. There are thirteen stories, and each one is distinct. Each story he tells has a different point to make, or lesson to be learned, or personal revelation to be discovered about Jason and/or his family. While reading, there were times where I laughed out loud, got a little teary eyed, or wanted to punch certain characters in the face. I think it's great when one book can make you experience a variety of emotions, and Ugly to Start With did just that.

Pros/What I Liked: The unique narration was enjoyable. I was suprised to find that I was glad that the chapters were spaced out, time-wise. It was almost as though Jason was figuratively fast-forwarding past points of his life, stopping at memorable times, and "pressing play" to get a story across to the reader. If something important happened between stories, the author made sure to mention it during the next chapter. I think Jason was a realistic narrator, and I found that I could relate to him at times. He isn't a goody-goody or a "bad boy"...he's just Jason, a young guy who hopes and dreams of becoming something greater than what he is, wanting to fully take advantage of what life can offer him. In that sense, I understood how he felt, and I think many young adult readers will connect with him for this reason. It was interesting to see his interactions with his family and neighbors evolve during the course of the book. Another thing I liked about this book is that none of the stories reached a point where I felt emotionally overwhelmed. Many of the YA books I read do, at some time or another, contain an event or relationship that simply overwhelms me with how deeply emotional it becomes. I'm talking about romance, tragedy, drama, etc. While I did feel emotionally connected to and affected by Ugly to Start With, I never felt like I was having a heart attack at any point. (Maybe it's because this book wasn't narrated by a hormonal female? Haha, whatever the cause, it was a much appreciated break from what I normally read.) Finally, I felt that the ending left me with something to think about. Jason wonders what kind of man his father really is, and that makes the reader look back on the events of the book and wonder as well. It also made me think about my childhood and parents, and how my thoughts on some of their actions have changed as well.

Cons/What I Didn't Like: Ugly to Start With is different than my normal book picks, but not necessarily in a bad way. At some points, I was confused about when the chapter was taking place, time-wise. Because the chapters were individual stories, it was hard for me to stay interested in continuing my reading at times. I never got that "gotta keep reading, I can't put the book down" feeling with Ugly to Start With. There were two stories that I'd like to mention in this section. "Ugly to Start With" was a very, very, very sad story for me to read. I am a crazy-cat-lady-in-training, and what happened to Skinny Minnie made me want to sob. (Fellow cat lovers who want to read this book, consider yourselves warned.) But I realize that the story had a more important reason for being told besides "we didn't want the cat inside." It was more indicative of the state of affairs in the Stevens household, and the way things worked when the family was run by Mr. Stevens. The other story I had issues with was "Carter." I had read, from another reviewer, that this chapter would be "challenging" to readers, but I was not prepared for the level of "challenging" that was reached in that story. *Possibly spoiler alert* I felt really uncomfortable reading about what happened between Jason and Carter Randolph. I mean, an adult touching an underage boy specifically in a sexual way, whether it was done by a man or woman, and especially when the adult was clearly aware of the young boy's submissive attitude, was not something I imagined I'd be reading about. (At least, I think Jason was underage...I'm not sure exactly how old he was at the time, but I felt that his mental state indicated that he was still a young teen, a minor.) That story was very emotionally affective to me, and while it was certainly an important event in his life, I think it added a sort of strangeness to the book that I didn't feel from any of the other stories. "Very uncomfortable" would definitely be the way I describe my experience with that chapter. Finally, the book felt very slow-paced to me. I understand that the individual chapters aren't closely connected to each other, which gives the author very little opportunity to "speed things up" but at times, I felt a little bored and ended up skipping some paragraphs. Not often enough to make me dislike the book, but often enough to bother me a bit.


Overall, I would recommend this book to older readers looking for a story and narrator that they can relate to and believe in, a story that remains "real" while still surprising the reader at times. (Especially with a setting in the 1970's, with some defined racial divisions...it's a setting that's foreign, but still imaginable to most readers. I certainly appreciated it, rather than having it take place in the 21st century.) I think readers will enjoy the narrative style of Ugly to Start With, and the experiences that Jason had growing up will remind readers, like they reminded me, of the "highs and lows" of adolescence, of some tough situations, of awkward moments, and of some very happy times as well.